My name is Jared. I am a programmer, web developer, and general-purpose nerd living in Austin, TX. I have recently finished a degree in Computer Science and English at the University of Texas. 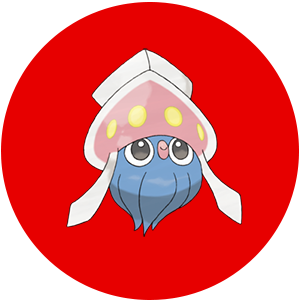 I built Inkana when I first began learning Japanese. I used to it help myself learn hiragana and katakana. Flashcards are my favorite way to learn new information and building a digital version was a lot of fun.

Inkana was built using React and you can view all my code on GitHub. 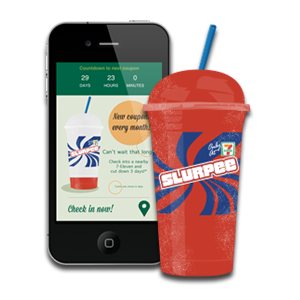 I worked on this project with Ash Lyons and TC Schiller at a hackathon hosted by T-3 and sponsored by 7-Eleven. We wanted to design an app that allowed users to engage with 7-Eleven during a visit with as little effort as possible.

We came up with Savin' Eleven, a web app that provides the user with a countdown to a free Slurpee every month. If the user checks in at a 7-Eleven location a whole week is taken off their countdown.

The app was a success! After a blistering 24 hours of work we managed to win third place in the hackathon. Our web app was even selected by Seelio as one of their nine favorite projects of 2013. The 7-Eleven API was only publicly usable for the hackathon, but you can still see our work on Github. 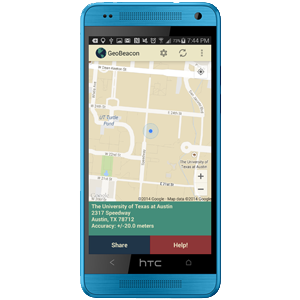 I worked with Katherine Ensign and Jeffrey Li to develop an Android app that simplifies location sharing for the user. With GeoBeacon a user can immediately text a friend the nearest address to her location along with a Google Maps URL showing that location.

GeoBeacon also provides specialized messaging in case of an emergency. A user can manage an emergency contact list. When a user needs to send a distress message he can share his specific geographic coordinates—in addition the nearest address—with the click of a button. The message will be sent to all emergency contacts as well as 911.

GeoBecaon is a completed app, however, due to the delay of national text-to-911 implementation we have postponed releasing GeoBecaon on Google Play.

The theme for Global Game Jam 2014 was, "We don't see things as they are, we see them as we are." After a bit of philosophical pondering, my team came up with a concept.

Cold War is a game of perpetual defense. The player takes command of astronauts defending a base on Mars from incoming snowmen. The play area is a grid displaying the incoming snowmen, and each turn the player can spend resources to deploy various units. Our personal favorite is the giant toaster that catches and melts snowmen.

Not only does the player have to worry about units, she must also occasionally change perspective. There are three types of snowmen: common, uncommon, and rare. But a player can only identify two types at any given time. The rare snowmen wear a red scarf and do a lot of damage. The uncommon snowmen wear a blue scarf and only do a moderate amount of damage. In red mode a player can see the rare snowmen, and in blue mode she can see the uncommon snowmen. The user must occasionally change perspective to find out which snowmen are rare or uncommon, because if he stays in one mode some of them will just look like common snowmen!

When I'm not busy coding I enjoy reading, writing, and cooking. I'm a huge fan of Star Trek and can never pass up an opportunity to enjoy Chinese dumplings. Feel free to take a look at my resume and contact me if you are interested in my work!